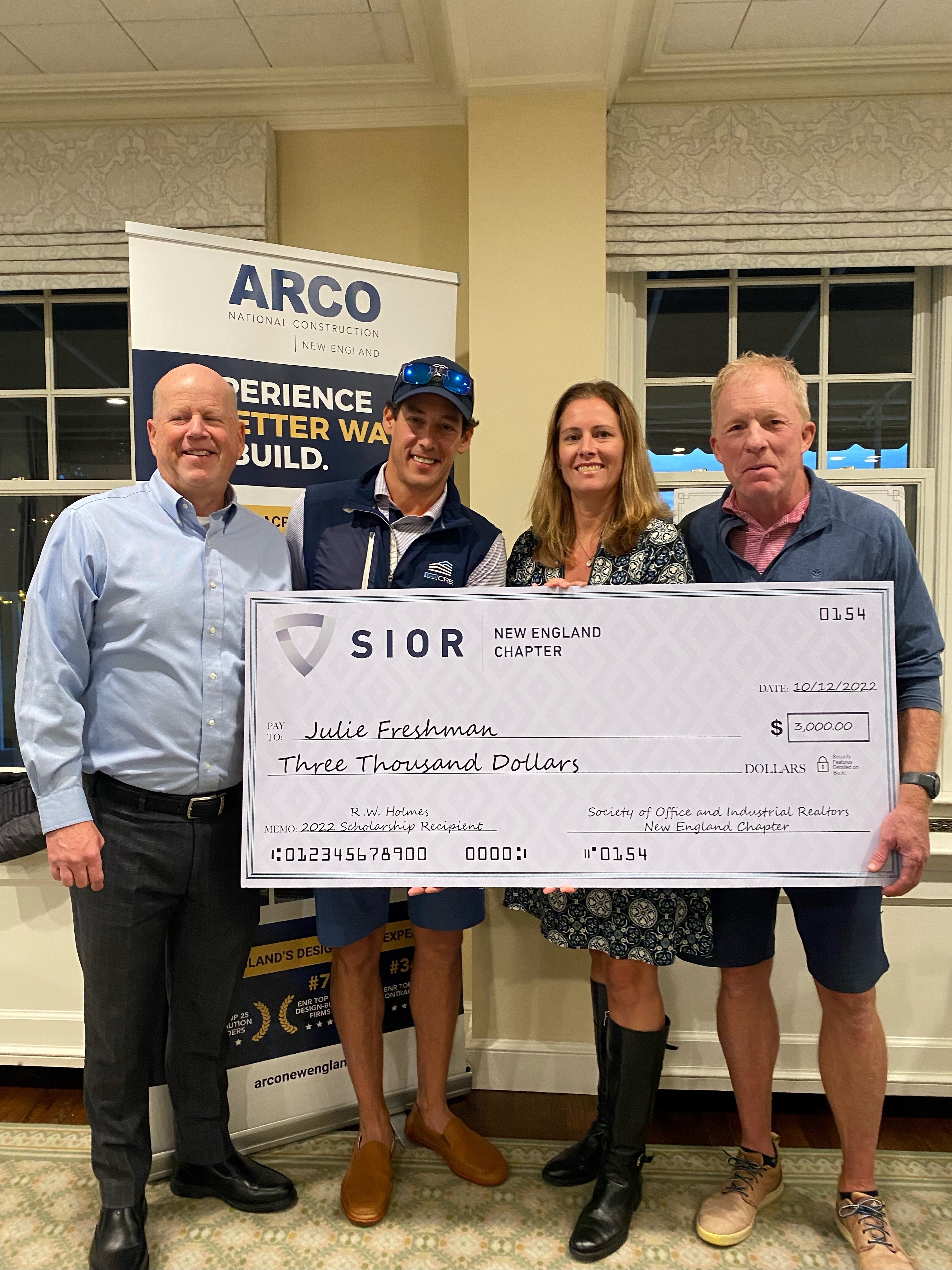 Newton, MA The SIOR New England Chapter held its annual 15th RW Holmes Scholarship Award Presentation at Brae Burn Country Club on October 12. Approximately 30 golfers attended a picture perfect day for 18 holes of golf. Registration started at 11:30 a.m. with a scramble format that started at 12 p.m. Greg Klemmer welcomed everyone to the event that held four golfers per group. The course was dry and the greens were extra fast.

Golf concluded at 5:30 p.m. with a cocktail reception, golf awards presentation and the RW Holmes Scholarship.

Klemmer thanked everyone at the reception that was held on the balcony at Brae Burn. He thanked Bob Cleary who is the member host at Brae Burn for organizing the event. Cleary did a great job with the golf format and appetizers. Klemmer spoke about the SIOR organization and designation and stated that unlike other organizations that host events with 200-300 attendees, SIOR is an intimate number of the top brokers in the industry. Here SIOR members become a development of a group of connections on a national basis. In our industry, real estate clients have to know who they can trust, who knows who and who is connected in the industry to get answers. SIOR is not only the most elite designation of the top performing brokers but members must abide to the highest ethic standards. Klemmer believed that the ethics requirement was the best part of the SIOR organization that keeps out unethical people. He stated that you can trust an SIOR that has built a network of brokers nationally. If a real estate client has an issue then the client can reach out to an SIOR for help.

The golf awards were then announced:

1. Winner of the Longest Drive went to Claire Richardson.

2. Closest to the Pin at 4 feet was Parker Snyder.

3. The next hole with Closest to the Pin (there were two closest to the pin holes) at 2 feet one inch with Joey D.

4. The team for second place on the net score went to Jeremy Freid’s team.

6. The team with the best gross score of 76 went to Bob Cleary’s team.

Congratulations to the winners!!

The cocktail and hors d’oeuvres evening was brought indoors for the announcement of the RW Holmes Scholarship. Robert Holmes was a long-time SIOR member who had passed away many years ago. His son, Garry Holmes, carries the SIOR designation and Garry’s daughter, Elizabeth, is working on becoming an SIOR. Both were part of the presentation.

Jeremy Fried welcomed everyone as he is the incoming Chapter president as of this week. This was Klemmer’s last event serving as chapter president and he served a term a few years ago. The chapter and Fried thanked Klemmer for his years serving as chapter president and on the chapter board. Klemmer was presented with gifts from the chapter. Fried then made some announcements on upcoming chapter events. In January, 2023, he is planning an event with CREW. During the first week of February, 2023 he wants to hold a hockey night as a new chapter event with cocktails and appetizers. His goal is to hold a chapter event every 4 to 6 weeks.

Fried then invited Garry Holmes to make the announcement on the scholarship award. Garry mentioned again that this was the 15th RW Holmes Scholarship that goes to a junior broker associate. The award is a monetary gift that can only be applied to an SIOR education course or an SIOR conference. This year the scholarship was awarded to Julie Freshman of MG Commercial Real Estate, Providence, RI. Congratulations to Julie! She has four years of commercial real estate broker experience and her long-term goals are to continue to grow and build her career in commercial real estate. She served previously for 15 years as an environmental engineer and changed her career in 2018. She has already attended SIOR designation courses and will be focused on industrial real estate. She is an active member of RIMA, CREW, RI Chapter of the American Heart Association, a board member for RI Commercial and Appraisal Board and the RI Association of Realtors.